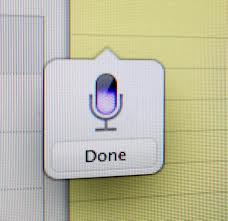 OS X Mountain Lion supports Dictation. So wherever you can type, you can use your voice instead. We’re not talking Siri yet. Dictation is is available in Apple products which do not have Siri yet and Mac happens to be just one of them. Dictation is a perfect companion for those, who do not have the mobility or typing skills required to compose long emails or documents.

Dictation works seamlessly with almost every application and if you pay attention to a few capabilities of Dictation, you can make the most of Dictation in Mountain Lion. When you use the keyboard dictation feature on your computer, the things you dictate will be recorded and sent to Apple to convert what you say into text. Your computer will also send Apple other information, such as your first name and nickname; and the names, nicknames, and relationship with you (for example, “my dad”) of your address book contacts.  All of this data is used to help the dictation feature understand you better and recognize what you say. Your User Data is not linked to other data that Apple may have from your use of other Apple services.

Information collected by Apple will be treated in accordance with Apple’s Privacy Policy, which can be found at www.apple.com/privacy.

When you turn off Dictation, Apple will delete your User Data, as well as your recent voice input data. Older voice input data that has been disassociated from you may be retained for a period of time to generally improve Dictation and other Apple products and services. This voice input data may include audio files and transcripts of what you said and related diagnostic data, such as hardware and operating system specifications and performance statistics.

You can restrict access to the Dictation feature on your computer in the Parental Controls pane of System Preferences.

To use Dictation, open any application that has a text input area like TextEdit or Pages or Microsoft word and position your cursor in that text area. Press the Shortcut key twice (by default, it’s the Function key or fn key). A small microphone icon will appear below the cursor.

Begin talking. When you have finished talking – click the “Done” button below the microphone. Alternatively you can press the function key twice again when you’re done speaking. After a few seconds, your voice will be transcribed into text. Just say your friend’s name, and Dictation knows who you mean. It works with information in the Contacts app to recognize and spell names accurately, even if they have unusual spellings.

Dictation understands basic text-related commands such as “all caps,” “new paragraph,” and “new line.” When you say “period,” “comma,” “question mark,” or “exclamation point,” Dictation punctuates for you. Dictation includes many voice “shortcuts” that allows you to manipulate the text and insert symbols while you are speaking. Here’s a list of those shortcuts that you can use: