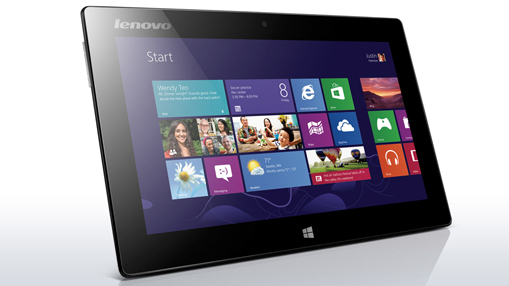 Lenovo has launched the Miix, a 10.1″ model that’s also meant to be used with a keyboard. It is said to be a watered-down ThinkPad Tablet 2, which received good response and sold quite a lot of units priced at $600. The Lenovo Miix 10 will run an Intel Atom Processor, contain 2 GB of RAM, and keep all your data cozy on a 64GB SSD, which is pretty good specs for a tablet!

Lenovo Miix can be used as a tablet for movies, music and games, as well as office work with equal ease. There is an optional ‘quick-flip’ folio case complete with built-in AccuType keyboard, which lets you switch between tablet and full-function laptop PC with ease. The IdeaPad Miix sports a 10.1” HD LED Multitouch display with a resolution of 1366×768. Display is In-Plane Switching (IPS) for vivid colors and nearly 180-degree viewing angles. The screen also supports 5 point multi-touch and integrates with Windows 8 with ease.

The unit features a light number of ports including a Micro USB 2.0 connector for charging, a Micro SD card reader, Micro-HDMI, and a headphone jack. We could see a potential port missing – full sized USB port. So, if you definitely need this port, you might have to consider buying a converter.

Interestingly, The Miix is selling for $600 at Lenovo.com and is selling $100 lesser at Amazon, which makes it a great opportunity to buy the device at $100 less. This device is definitely worth its price at $600. Amazon makes it an absolute steal by listing at $500. The Miix has a battery life for 10 hours of runtime and weighs around 1.3 pounds. One of the watered down feature from Thinkpad Tablet 2 to Miix is the 1.3 MP front-facing webcam. Thinkpad Tablet 2 has 2 camera and the front one has a resolution of 2 MP. Still, overall Mixx is a great buy, especially when you buy it from Amazon.

Buying Recommendation: Buy from Amazon and save $100.